In the history of the art of the burial tomb, it is today quite rare, if not almost impossible, to be able to express oneself artistically for a contemporary funerary artwork because the norms have come to constrain this ancestral expression. While we enjoy walking in our cemeteries, these new places are becoming boring. Except for "monuments to the memory of ..." or commemorations of a famous person or a dramatic event, artists have deserted this direct reflection on death and one of the traditional rites, the burial. So what a pertinent opportunity presents itself to the artist Milène Guermont when an eminent scientist, a specialist in light, commissions a tombstone from her. The commissioning person being a native of the Causses, the ancient and eroded massifs that extend to the south and southwest of the Massif Central and its neighboring "lands", it is with fiber-reinforced, ultra-high-performance concrete, one of her favorite materials, that the artist proposes the elevation of a landscape, a regeneration of Causses in twelve facets, composed of peaks, steep slopes, recesses and curious luminous underground rivers. A tomb is technically composed of three parts: the statue (upper level), the stone (the pedestal) and the sole (the base). For CAUSSE, the artist succeeds in associating the stone with the statue so that it becomes one. The buffering of the black-tinted concrete, which gives it a slightly velvety zinc rendering, reinforces the identity of this powerful sculpture, which is placed on a white bush-hammered marble base, and accentuates the idea of ​​geological thrust. This telluric thrust, perhaps provoked by the penetration of these fiber-optic beams and poured into the concrete, pierces the flesh of this mountain and brings a twinkling to the shaded slopes. CAUSSE is a work resulting from a cosmogonic reflection, a dialogue between photoelectricity, electrons and the sacred; nothing is easy to perceive and yet so palpable in this expression where the material made by man is rather synonymous with roughness and not finesse. So we must enter the Montparnasse Cemetery and abandon our reluctance to caress this physical elevation that is concentrated on the Land of Causses as elevated to the rank of sculpture.

When contemporary art and high technologies enter into the cemetery.

CAUSSE is an artwork commissioned by an eminent French scientist to Milène Guermont to be his ultimate tracking place on Earth.

Several authorizations were necessary to install this sculpture made of ultra high performance fiber-reinforced concrete and light on the preservation area of the Montparnasse Cemetery in Paris.

The silhouette of the sculpture evokes the mounts of the Causses – a group of limestone plateaux in south-western France – where the scientist (who is also art collector) is born.

CAUSSE is formed by 12 facets, representing the 12 floors of the photo-electric cell with multiplied electrons invented by the scientist. Thanks to optical fibres embedded into the concrete, light goes from one facet to another, like the electrons in the photo-electric cell. When a cloud, a bird or a visitor passes in front of an optical fibre, it darkens a point of light on another facet.

Perfectly vertical, the longer side of CAUSSE anchors it powerfully in the ground and defines an ascending strength. The obliques of the sculpture come from this mark. The global tension of the lines creates an infinite visual dynamics, a synthesis between nature and abstraction: a movement of elevation to which a spiritual interpretation can be given.

A passage from the Earth to the sky, games with light and triangles, an installation on a conservation area, innovations and exceptional authorizations, CAUSSE bears similarities to the monumental sculpture PHARES imagined at the same moment by Milène Guermont to create a dialogue with the obelisk on the Place de la Concorde in Paris.

CAUSSE becomes the last home of its commissioner: March 16, 2018.

Tour with the Artist: February 22 at 4pm.

Click on the image above and others will appear. 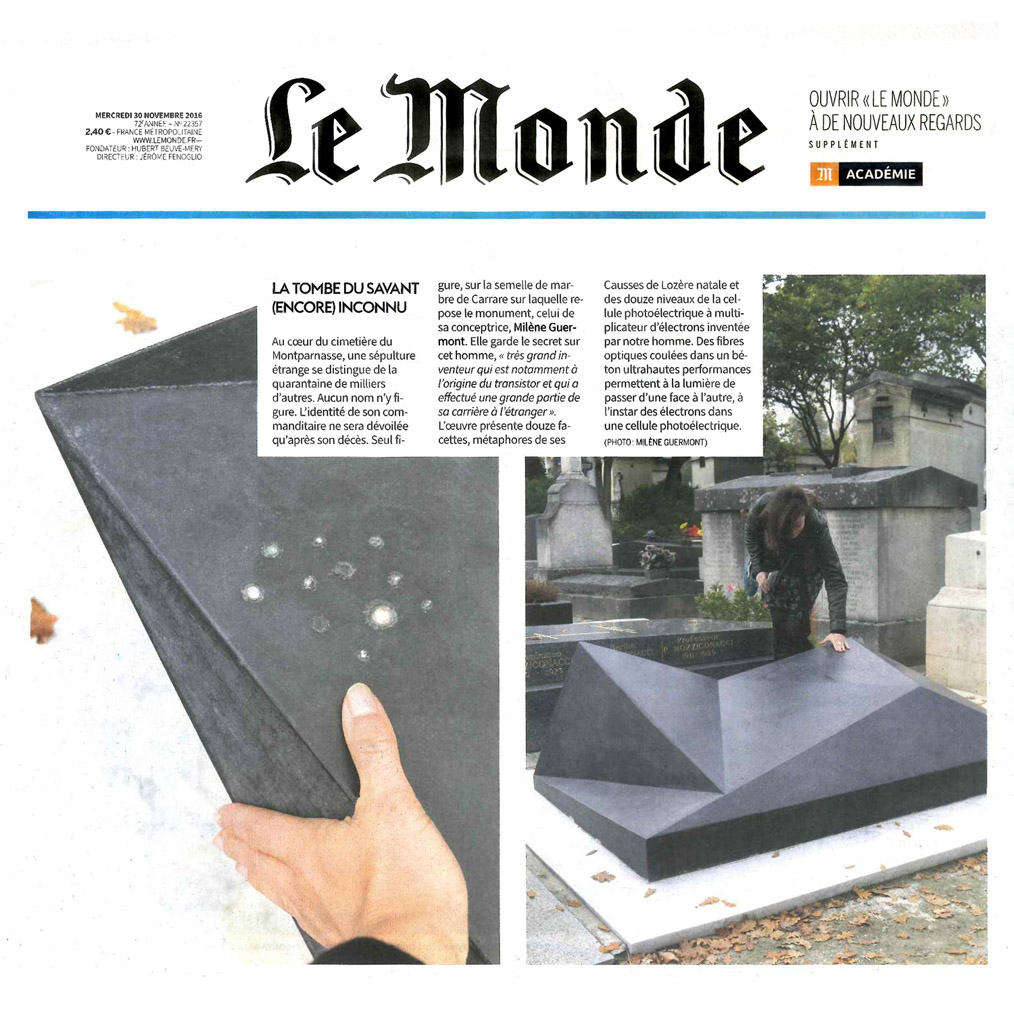 To listen the interview of FRANCE INTER radio click here or bellow: 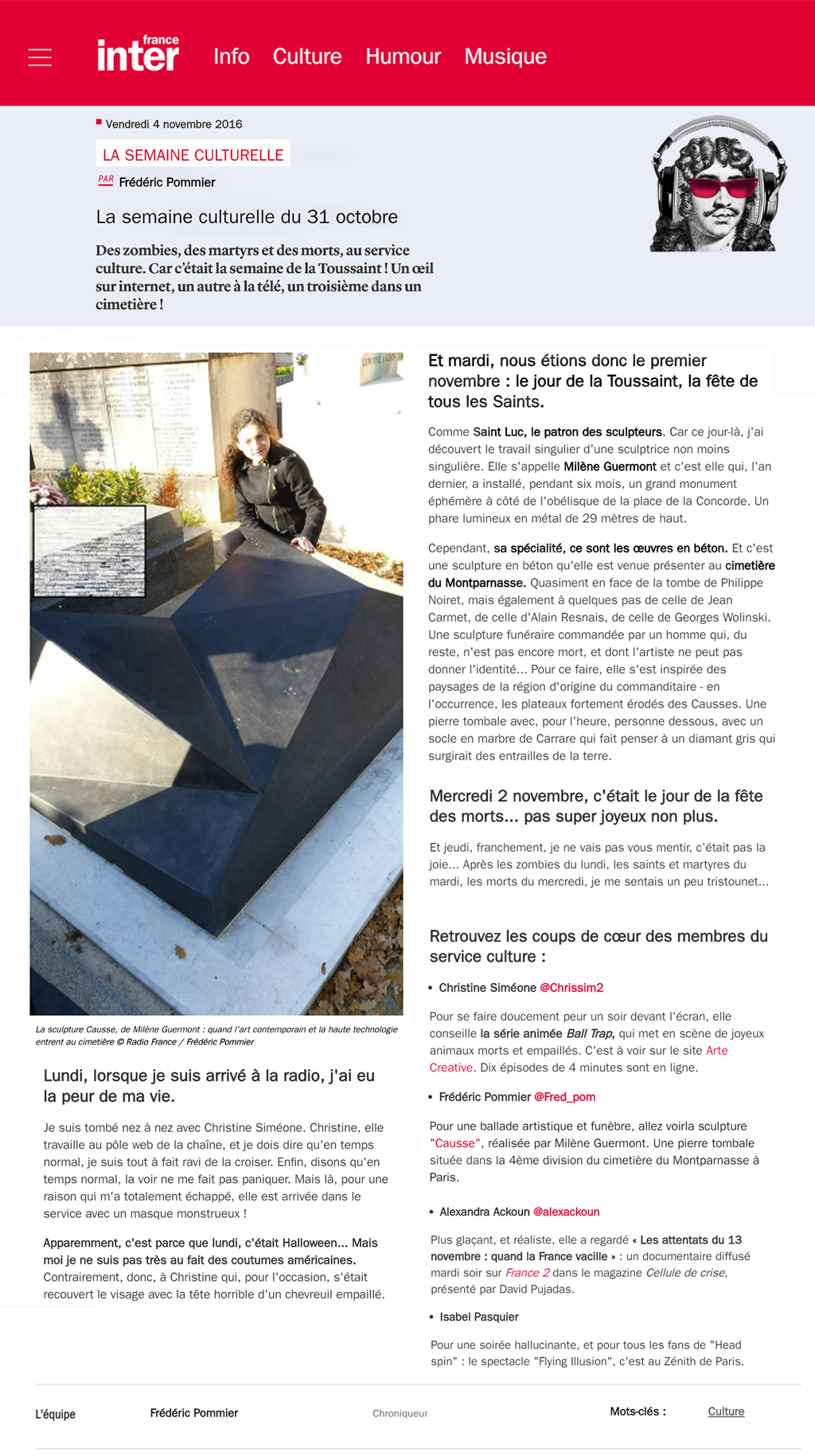 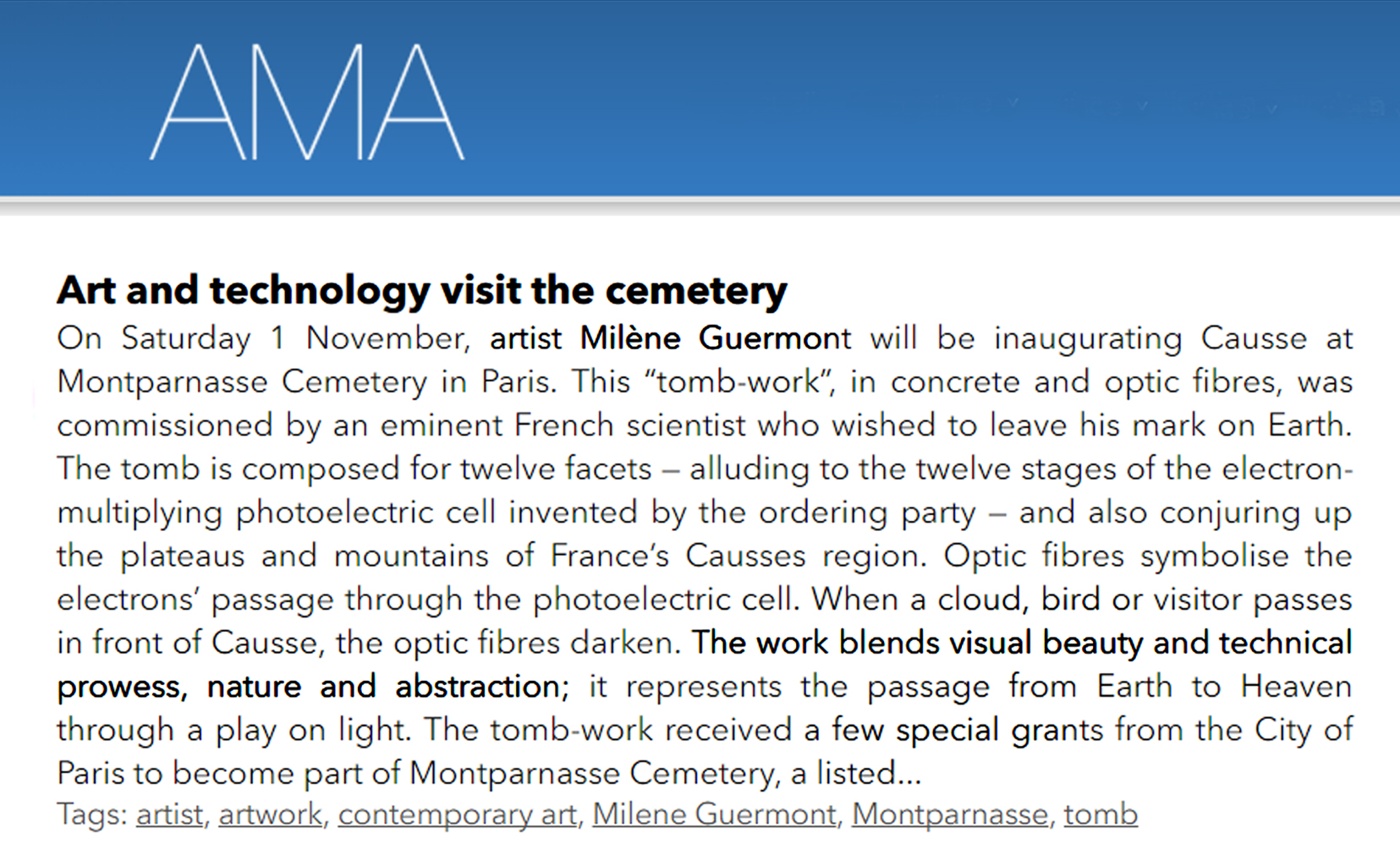 THE BLOG OF ISABELLE KEVORKIAN